Despite my lack of posting recently, I am still going strong and collecting.

This post is mostly experimental, as I haven't posted since I moved to my new house in June 2014. That was the last time I used my computer, and it has now been replaced by a phone and tablet.

Basically, if this post works, I will be able to resume blogging at a reasonable rate.


Guess I might have to take a few photos of cards with this thing! 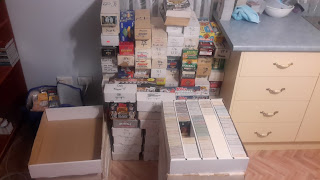 OK,  just one to begin with.

Collecting in 2013 is complete. I really wish I had more time to write here these days. The above pic is what I want my stash of cards to look like. Imagine an Earthquake has caused this beautiful set of shelves to topple forwards onto the floor. That's what my stash of cards currently resembles.

The only place that I am able to read and comment in the Blogosphere is at work, and since I can't really take my cards there to photograph and post, I'm essentially confined to being just a reader & commenter.

Over the last month, I set aside about a thousand bucks to purchase sets of cards that I have always wanted, or always get. Naturally, the 2013 Topps Factory Set was first, and the complete Update Series was second.

I also found some cheap junk-wax boxes here in Australia which had free shipping - 4 boxes of 1993 Stadium Club came my way for less than $70. 1 x Series 1, 1 x Series 2 & 2 x Series 3. I had decided on 2 of the Series 3 boxes, because I knew that another Blogger has wanted the Charlie Hough Insert for a very long time. I didn't even land one of them for myself. 3 copies of the David Nied card from the same insert set made me angry at Topps collation, even if it was over 20 years ago.

Some other sets came my way : 2008  & 2009 Upper Deck, as well as 1998 Fleer Tradition, including all SP's in the checklist, and the complete '63 Fleer Retro set issued alongside the '98 Tradition set. There are some absolutely amazing cards in that set!

To the guys who may have been waiting for PWE's or Blogger Boxes from me, you've just read about the reason why I haven't sent them out yet - I really wanted to see if I could nail some wants for you with my new cards before I sent 'em out.

So, the packages have been put together, and they'll be thrown your way on Monday.

Thanks must also go to Night Owl and Nick @ Dime Boxes for mentioning me in the last couple weeks. To me, you guys are THE blogarometers (it's a thing!), and for me to be mentioned by you guys recently really means a lot. Expect a friendly reward!

It's been a while since my last post, but I do have a good excuse : My Wife gave birth to our first child 13 days ago.

I've looked at maybe 100 baseball cards since that day, and it really is impossible to keep up with everything going on around here.

Mr. Night Owl, I did read your comment over at Dime Boxes, and I also found that I have the other 1995 Stadium Club card you require (Eric Karros) here in my doubles pile. It will be heading your way, along with Delino.

I will email you in the morning, man!

Hopefully I'll be able to find the time to blog about cards soon enough, but at this stage I really have to prioritize my priorities! 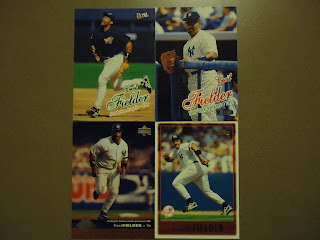 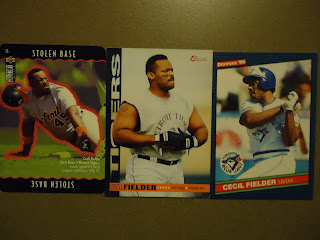 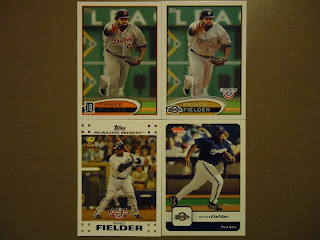 Just something I noticed... I know this card is one of Nick's personal favorites, and I happened to be leafing through my Mike Devereaux collection a short time ago.

I couldn't get a nicely focused photo of the front of the card, but here's a stolen pic : 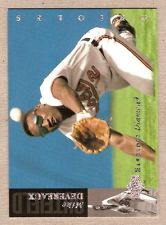 I turned the card over, and here was the back : 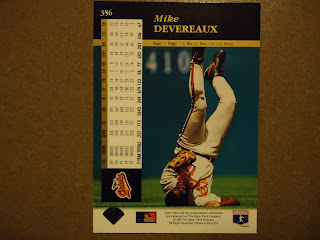 I'm pretty sure the formatting here blows, but let me just say I think all of these pics are from the same play, based of the marks on Mike's left knee.

Man I hope the pics are aligned...! 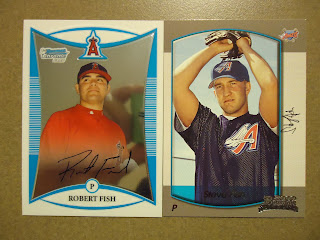 Found me some fish in my collection.

They're both Angels players, so I guess they'd make a great team along with Tim Salmon and Mike Trout.

I present to you, Robert Fish (2008 Bowman Chrome Prospects #142) and Steve Fish (2000 Bowman #289). They're two more Angels players with oceanic names, and I can't recall a more seafood-named franchise in the history of any sport.

Except the Marlins, Rays or Dolphins...

Posted by beefman at 3:54 AM No comments: 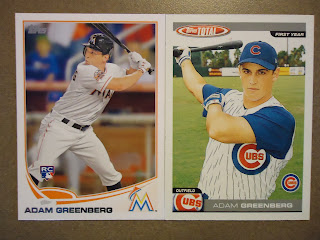 Well, I think everyone out there can recall what happened last year.

After getting beaned on the first and only pitch he saw in the Majors, (I think it was 2004 or 2005), Adam Greenberg disappeared from the Majors, apparently never to be seen again.

He signed a one-day contract with the Miami Marlins last year and made it back to the Majors for a very heart-warming single at-bat.

He may have struck out on 3 pitches, but it was no disgrace. He K'd against a guy who was dominating the league on his way to a Cy Young Award, (R.A. Dickey), and I'm guessing nobody left the stadium that day with dry eyes.

I had trouble recalling if I owned a card of Greenberg's from his Cubs days, but thanks to 2004 Topps Total, I have one in my collection.

You are still sorely missed in the collecting world.